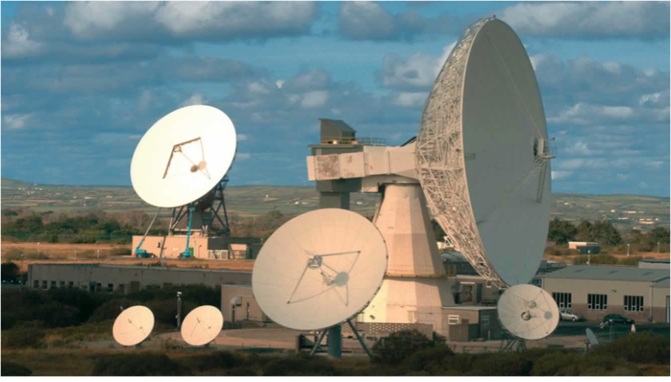 Goonhilly Satellite Earth Station is a large telecommunications site located on Goonhilly Downs near Helston on the Lizard peninsula in Cornwall, England, UK. It was at one time the largest satellite earth station in the world, with more than 25 communications dishes in use and over 60 in total.

Its first dish, Antenna One (dubbed “Arthur”), was built in 1962 to link with Telstar. It was the first open parabolic design and is 25.9 metres in diameter and weighs 1,118 tonnes. Arthur received the first live transatlantic television broadcasts from the United States via the Telstar satellite on July 11, 1962. It is now a Grade II listed structure and is therefore protected.

The site’s largest dish, dubbed “Merlin”, has a diameter of 32 metres. Other dishes include Guinevere, Tristan and Isolde after characters in Arthurian legend, much of which takes place in Cornwall.

The earth station is powered by the national grid. If power fails, all essential equipment will run off huge batteries for 20 seconds, during which time four one-megawatt diesel generators will take over. The nearby wind generator farm is not part of the complex

The site has also played a key role in communications events such as the Muhammad Ali fights, the Olympic Games, the 1969 moon landings and 1985’s Live Aid concert.